Author, Actor & Cinematographer Ray Buckley originally contacted us about getting some help building his social media presence but we quickly struck up a creative partnership to do something unusual & experimental to get the word out about the upcoming release of his first book of poetry entitled “Magnesium“.

What we have done for Ray Buckley / Magnesium: 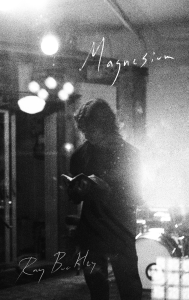 Together we devised Poetry In The Wild a project that had participants release over 50 limited edition copies of “Magnesium” into the wild in 40+ places in 10 countries around the globe. We gathered photos of of each book out “in the wild” and posted them on social media with the hashtags #Magnesium #Poetry and #PoetryInTheWild. The results were both wild and effective with copies left in places ranging from an ice cave in New Hampshire to the beach on Maui and near the famed Brandenburg Gate in Berlin, Germany. Participants had the option to leave a note in the local language on their drop copy and posted their photos on their personal social media accounts as well.

Ray was thrilled with the results as it combined a way to spread the word about his new book that was both creative and fun.

Julienne’s work is first-rate. No amount of overstatement by me can compete with the reality of her skill. I grant that this is a field I know nothing about, but speaking strictly as someone who put all of his ignorance and all of his faith in her expertise, I feel unassailable to say that you’d be wrong not to.

Below is a gallery of some of the photos from Poetry In The Wild.

Portland, Maine (in a lobster trap!)